Mandarin is quickly becoming one of the most important languages in today’s world.  Familiarity with this language would provide the upcoming generation with a useful advantage in relating to the Chinese people, whose influence worldwide is increasing day-by-day.  For this reason, elementary lessons in Mandarin at the primary school level have been designed to provide this introduction.

We have planned six 50-minute lessons for primary school age children.  Lessons include development of listening, speaking, reading and writing skills, and are constructed around dialogues involving every day events.  In this way, students’ learning will not be fragmentary, but will enable them to respond appropriately with grammatically correct sentences to inquiries.  Instruction is geared toward learners with varying learning styles: visual, aural, and kinetic.  Every effort is made to reduce “teacher talk” and get students speaking and using Mandarin from the onset.  Many games, songs and activities are planned.  Students will be encouraged to work in teams, small groups and as partners using the target language, commensurate with their maturity and ability, making them to the extent possible responsible for their own learning.  Teachers will use target language for class commands so as to get students accustomed to hearing and responding appropriately.  Studying with a native Mandarin speaker, (as such teacher is available), especially one with a Beijing accent, will ensure that children’s tones and pronunciation are of a high standard.  Students will be given a dialogue and Chinese character worksheet for each lesson, plus other learning materials, which can be collected into a portfolio for future reference.

An overview of each lesson follows.

Teacher tells a story by drawing two children on the board and eliciting a conversation involving basic greetings: How are you?  I’m fine…etc.  The conversation is constructed and conveyed at first orally, then is written in pinyin (Chinese using the English alphabet) and Chinese simplified characters with English translation.  The difference between the original and simplified characters will be explained.  Students will be encouraged to use their hands as they speak to model the tones, i.e. first tone (high & flat), second tone (goes up the hill), third tone (goes down in the valley), fourth tone (goes down the hill).  This approach reinforces kinetically the tone value. A worksheet with the short dialogue will be given to each student at this point so that they can then practice in teams, then with partners.

Chinese characters will be introduced as pictograms.  Students will be asked to stand and act out the character; for example, Man with a hat, means “person” etc.  Again, this approach is a kinetic reinforcement.  These characters will be related to the dialogue with much review and checking for meaning and pronunciation.  Usually there will be about 8-10 new characters per lesson.

Lastly, children will be given a quiet time project, listening to music, and tracing characters studied.

Again, the teacher will tell a story about two children drawn on the board about asking names, eliciting the conversation from the children, then translating into Mandarin.  This lesson will also include a review of Lesson One.  As in Lesson One, the dialogue will be learned orally at first, then put up on the board in pinyin, English and with Chinese characters.  Practice in teams and partners will follow with lesson handouts given to students for reference.

Chinese characters will be modeled as above.  A team game will follow identifying characters.

In small groups, students will play “What’s your name?” game, using cards with Disney personalities.  One student asks, What’s your name? The next student draws a card and says, “I am ________.” In this way, they get used to the question and answer formats.  The teacher can ask, “Is he she good looking?”  Students answer yes or no in Chinese, thereby learning the negative form.

Similar in format to previous lessons, students are taught the positive, negative and question form of “to have.”  Students will be taught this lesson in conjunction with learning parts of the body, using two songs:   “Head & shoulders, knees, and toes” in Mandarin, and “Two Tigers.”  In small groups, students will also play a game using flashcards with parts of the body.  One student will draw a card and ask, per the card, “Do you have a nose?”  The next student answers yes or no.  That student then asks the next student the question, etc.  Finish with quiet writing of characters.

Similar in format to previous lessons, this lesson will teach positive, negative and interrogative forms, plus possessive.  Nine animals will be taught.  Games will involve drawing flashcards with students asking “Do you love tigers?”  The next student answers, yes or no.  Then that student asks the next, and so on.  Other activities include coloring a Chinese lion, reviewing parts of the body from previous lesson, eyes, mouth, nose, ears, teeth, etc.  Terms for family members are introduced, “I love mother, I love father, I love younger brother, older brother, younger sister, older sister,” etc.  Character stroke order can be taught by a coloring worksheet as well.

Similar in format to previous lessons, a dialogue is elicited from students about asking another’s age.  Numbers are taught up to twenty.  Worksheets will be used enabling students to match numbers with pictures and the Chinese character.  Flashcards with addition, subtraction in Arabic numerals will be used in a team game…whichever team answers correctly gets a point. Then we switch to flashcards with Chinese characters.  We also play BINGO.  Finish with quiet writing of characters for numbers.

Lesson Six:  How much is this?  Duōshăo qián?

Students have fun learning to buy and sell things and bargain too.  “Duōshăo qián?” could be the most important question in the Chinese language!  Using numbers learned in previous lesson, students practice buying pencils, notebooks, erasers, rulers from each other, one student acting as the merchant who tries to keep prices high, another acting as the buyer trying to keep the price low.  Students are given play money.  Whoever has the most money in the end, wins.

These six lessons are designed to give students the fundamentals of Mandarin Chinese.  They should be able to ask questions, respond either positively or negatively, in a manner appropriate to quite a few situations.  Vocabulary will include useful every day words for numbers, family members, parts of the body and animal names.  Games, songs and fun activities will reinforce learning.  All learning materials will be gathered into a folder, which can be used by family members to practice in the future.  This introduction to Mandarin Chinese will provide learners with a solid basis for further study and be enjoyable at the same time. 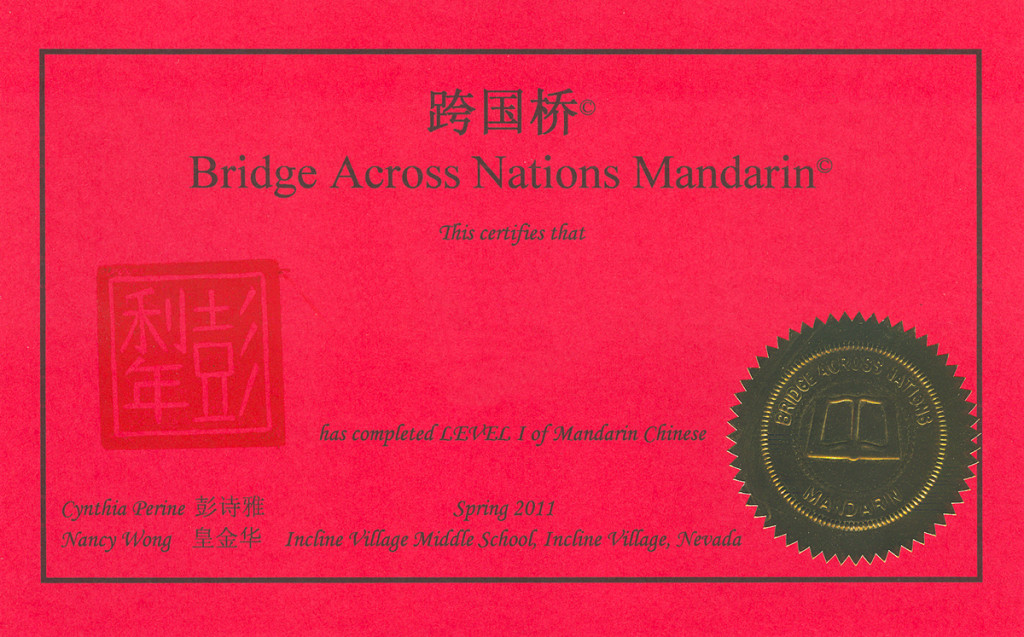